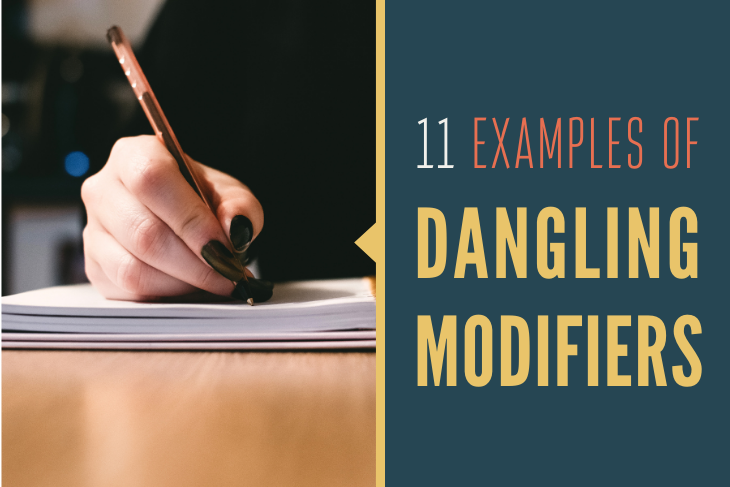 Do you know a dangling modifier when you see it?

And do you know what to say when someone asks, “So, what’s the difference between a dangling modifier and misplaced modifier?”

Once you read this post and look over its 11 examples of dangling modifiers, you will.

From henceforth, you’ll be the one to ask tricky grammar questions like this.

And even if you don’t want a reputation as a grammar nerd, knowing how to spot and fix modifier errors will make you a better writer.

What is a dangling modifier?

Misplaced modifiers are positioned so that they appear to modify something other than what they’re meant to describe.

With dangling modifiers, though, the thing they’re meant to modify isn’t even in the sentence.

So, it seems to modify something else, but it doesn’t make sense.

And since you don’t want to confuse your readers, you need to know not only how to spot them but how to fix them, too.

Enjoy the following examples of dangling modifiers. Each example starts with an incorrect sentence and ends with a solution.

By the time we’re done, you’ll be a better writer and editor. Dangling modifiers will have nowhere to hide.

Example 1 with a Participle Phrase

“Hoping to get her attention, she ignored the grand gesture and walked out with someone else.”

Who exactly is “hoping to get her attention?” Probably the one who made the grand gesture, right? After all, who would ignore their own grand gesture?

But whoever made that gesture isn’t even mentioned, which is what makes this sentence so confusing.

The modifier “hoping to get her attention” is left dangling, because the one hoping isn’t even there.

We can fix this by adding a phrase that identifies the missing subject:

“Hoping to get her attention, her ex had the restaurant named after her, but she ignored the grand gesture and walked out with someone else.”

Example 2 with a Participle Phrase

“Having missed school for a week, a written doctor’s note was needed.”

The written doctor’s note hasn’t missed any school — but someone has.

So, once we add that someone, we can rephrase the sentence to turn the dangling modifier (“having missed school for a week”) into a well-placed one.

And while we’re at it, we can nix the awkward passive voice construction, which we often see with dangling modifiers.

“Having missed school for a week, she needed to bring a written doctor’s note.”

Example 3 with a Participle Phrase

“Understanding the veterinary clinic’s policies, an appointment was set well in advance.”

Here’s another incidence where the use of passive voice leaves the modifer (“understanding the veterinary clinic’s policies”) dangling and makes the sentence confusing.

Once we add the person who understands the clinic policies, we can include them in an active voice construction and make this sentence much clearer:

Example 4 with a Participle Phrase

“Reading the hotel’s pet policy, our dog stayed at a local vet clinic during our vacation.”

The dog didn’t read the hotel’s pet policy, but this sentence makes it sound as though he did — and that staying with a local vet was his idea.

Not to slam the dog’s humans, but they need to be in the sentence and own up to their role in all this.

“Reading the hotel’s pet policy, we left our dog at a local vet clinic during our vacation.”

“Not having studied the lab manual carefully, the experiment was a failure.”

Who didn’t study the lab manual? Probably not the failed experiment — which is the victim in all this.

The one modified by “not having studied the lab manual carefully” is conspicuously absent (how convenient).

But we can fix this by adding the responsible party to the sentence:

“Not having studied the manual carefully, Bill and Ted botched the experiment (or did they?).”

Example 6 with an Adjective

“Hungry, the blueberry pie was devoured.”

The pie wasn’t hungry, but someone sure was. Once we add the culprit (or culprits), the sentence becomes clear.

“Hungry, my dad and little brother devoured the blueberry pie while I cleaned up.”

Example 7 with an Adjective

“Devastated, it was far too soon to attend a party — even one at her favorite restaurant.”

Nowhere in this sentence do we see who exactly is devastated. And it has to be a person — not a party.

We fix the sentence by adding the devastated person and rephrasing the rest:

“Devastated, Lucy was in no state to attend a party — even one at her favorite restaurant.”

The Hemingway Editor And App Review

“With nothing to prove, the dress made her the focal point of the evening.”

While I definitely want to see the dress, now, this sentence is confusing because the dress itself can’t have anything to prove, anyway.

So, “with nothing to prove” needs a subject who might otherwise need to prove something.

“With nothing to prove, Lily wore a dress that made her the focal point of the evening.”

“With a gasp, the lid was quickly resealed.”

The lid probably didn’t gasp, but whoever resealed it might have.

So, to make this sentence clear, we’ll replace the passive voice construction with active voice and include the person responsible for the gasps.

“With a gasp, Dr. Jefffers quickly resealed the lid.”

Example 10 with Prepositional Phrase and Participle

“Without knowing the recipe, it was risky to make a cake from scratch.”

The prepositional phrase “without knowing the recipe” should modify a person, but not a single person appears in this sentence.

We can fix it by adding the subject who doesn’t know the recipe.

“Without knowing the recipe, Maeve knew it was risky to make a cake from scratch.”

Example 11 with Prepositional Phrase and Participle

“After reading the poem aloud, his words, though eloquent, failed to move her.”

So, who read the poem aloud? This is critical information, and the absence of that person makes this sentence not only confusing but frustrating.

Once we add the poet, though, all becomes clear:

“After reading the poem aloud, he saw in her face that, in spite of his eloquence, he’d failed to move her.”

Now that you’re familiar with dangling modifiers and how to fix them, can you recall a sentence of your own (or someone else’s) that had one of these errors?

No need to dwell on past mistakes, though. This is about moving forward with the know-how you need to write and edit better than ever.

Doesn’t mean you won’t make this mistake ever again. Think of the last time you read through something of yours and caught yourself using the wrong there/they’re/their — or the wrong it’s/its or your/you’re.

It’s embarrasing, but it happens — even when you know better. Now, at least, you’ll be better able to spot those mistakes during editing.

If you’re ready for more examples, check out our post with examples of misplaced modifiers. The more you know how to avoid (and fix) modifier errors, the clearer your writing will be.

And the happier your readers.