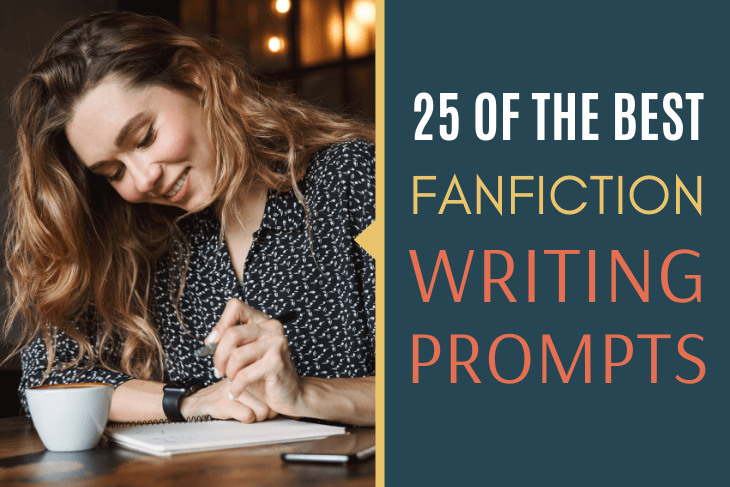 With fanfiction, the writer of a movie, TV series, or book has already done the character building.

As the fanfic writer, you get to throw your favorite characters into different “what if” situations.

Plenty of Doctor Who fanfiction writers, for example, write stories bringing the 10th Doctor and Rose Tyler closer together.

Just how close they get depends on the writer. But a solid ship (i.e., pairing) can generate a slew of spicy fanfic ideas.

Fanfiction is a great way to build a devoted readership and develop your writing skills.

All you need now is a list of intriguing fanfiction story ideas.

Whatever shows or books hold a special place in your heart, you’ll enjoy the following collection of thoughtfully-crafted fanfiction prompts. Jot down some fun ideas of your own as you work your way down the list.

So many things could go wrong when your favorite fandom characters go back in time to change things. What could they do to either endanger the human race or make things turn out better than before — but at a price?

1. Two characters you love are sent to the past and work undercover as flower shop owners to change the outcome at a famous wedding.

2. A nemesis time-travels to change a superhero’s origin story, changing the course of that hero’s life — and their own.

3. An interesting character with a bit part finally gets a chance to show what they’re made of when an old enemy incapacitates the bigger players to steal a recipe.

4. A favorite character goes back in time to stop the duel between Alexander Hamilton and Aaron Burr and changes the course of the country’s history.

5. One of your characters is so desperate to change things for someone they care about, they time-travel and save a life — only to erase another.

How can an alternate universe complicate things for a favorite character or couple? Play with any of the following scenarios or let your mind stretch beyond them to explore other possibilities.

6. Some of your favorite superheroes sacrificed themselves in the end. The line-up of survivors looks very different in an alternate universe, and you know why.

7. What would happen if, instead of your least favorite ship happening, one of the characters traveled to an alternate universe and came back with a better match?

8. A superhero visits an alternate universe where their high school crush developed special abilities and became their nemesis — but might not be unreachable.

9. Two characters that ended up together visit an alternate universe where they seem happier with different (and unexpected) partners.

10. In an alternate universe, your favorite villain finds their alter-ego leads a very different life — one that has nothing to do with heroes or illegal activity.

75 Of The Best Fiction Writing Prompts For All Writers

You know you’re just aching to get two characters together, and in fanfiction, you can make it happen. Keep your audience in mind when things get serious.

11. Take a romantic couple that makes zero sense or feels forced (e.g., Joey and Rachel) and shake it up, replacing it with one — or even two — that do.

12. A favorite couple is kidnapped and drugged by someone who clearly doesn’t know what they’re in for. The drug erases inhibitions, and the results are hilarious.

13. A favorite character meets a celebrity or a character from another fandom and discovers they have great chemistry. Someone gets jealous.

14. A favorite character is tricked into drinking something that causes them to fall head over heels for their nemesis, who does not appreciate the attention.

15. A villain learns something about the hero they love to hate and starts thinking about them differently. When they have a vivid dream, they take a risk.

This well-established subgenre is all about the feels. Take a break from the high-stakes action to create a special moment for two of your favorite characters. Think of it as a brief oasis where your favorite couples can just enjoy being together.

These tend to be short.

16. Think Kylo Ren and Rey stopping at an intergalactic spa and checking their lightsabers for an hour or two of seaweed, mud, and taking turns with a talking stick.

17. Han Solo and Leia are having a rough time with baby Kylo, so when Luke offers to babysit so they can reconnect, they take him up on it.

18. A favorite character has decided to retire from their stressful job and become a retreat master, making candles and living off the grid. S/he encounters opposition.

19. A favorite character stops at a bodega and buys a winning lottery ticket, which they decide to cash and spend in a way that expresses their values.

20. A puppy follows a favorite character home and turns out to be an alien admirer in disguise, who wins your character over and reveals something they need to know.

Plug yourself into any fandom with one of these self-insert fanfic ideas. Or let these inspire story ideas of your own.

21. You get to take part in your favorite ship finally happening. They might even name their first child after you. Or maybe they’ll just help you get out of their world alive.

22. You are the interfandom “Queer Bait Buster,” going from one series to another and challenging heteronormative and ridiculous ships wherever you find them.

23. You’re trapped in an elevator with your favorite character for a few hours, and you take the opportunity to help them deal with an awkward personal issue.

24. You stumble upon a spacecraft and meet a favorite character who, for some reason, knows all about you and your current problems. They offer helpful advice.

25. You’re serving court documents on a character who doesn’t respond well but who then apologizes to you and offers you something. You offer to help them instead.

One of the best resources for fanfiction writers is a Tumblr account. Not only can you connect with other members of a fandom, but you can also read other examples of fanfiction and share your own. You can do the same on Wattpad.

You can also find a treasury of prompts and story ideas on Pinterest. And while you’re exploring the options here, there, and elsewhere, get acquainted with the lingo.

Each post you read serves as a kind of fanfic prompt generator. Each captivating idea bears the beginnings of new ones. You could spend hours (it’s not hard) collecting seeds of exciting new fanfic stories.

If you’re looking for an actual prompt generator, though, consider the following options:

How will you use these fanfiction writing prompts?

Now that you’re armed with an assortment of fanfic writing prompts and helpful links, what fanfiction story ideas have begun to take shape in your head?

Before you share your work, do your due diligence to find out whether the original creators are okay with your writing and sharing fanfiction — which they might be, as long as you don’t profit from it.

Some authors enjoy the exposure. And while you can’t make money off fanfiction without a signed agreement with the original creator, you can certainly make a name for yourself.