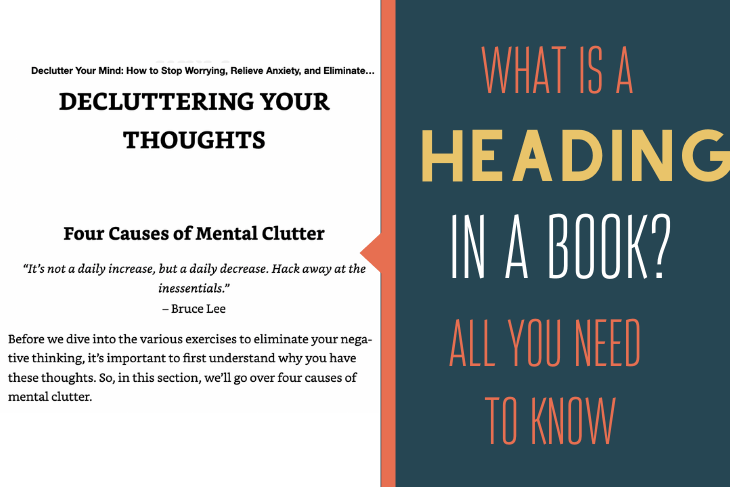 Aside from school textbooks, you wonder if headings in books are even necessary.

Or you wonder how to make them work for you.

So, do the same rules apply?

And how do headings help the reader?

And how do you craft headings that will make your book harder to put down?

What Is a Heading in a Book?

A book heading is a word or phrase that lets the reader know what the book’s next section is about. You’ll find headings at the beginning of chapters, pages, or even paragraphs.

So, what is the purpose of a heading, anyway?

In short, the purpose of a heading in a book is much the same as its purpose in smaller works like articles, essays, and blog posts like this one.

That said, digging a little deeper makes it easier to see why they’re so important.

What is the Heading of a Book Called?

In books, the queen of all headings is the title. At the next level come chapter titles, which are typically formatted as H1 headings using the style menu.

Next come headings in the H2 style, which break up the chapter into its main sections.

What is the Difference Between a Title and a Heading?

A title stands at the top of the network of headings and subheadings. It describes the book’s entirety, while the heading covers only the subsection of text it introduces.

Chapter titles are at the highest level of heading beneath the title (H1).

Headings in H2 style are used for top-level headings within the body of the chapter, with subheadings at the next level down (H3), and sub-sub headings at H4, etc.

Titles stand alone (or with a subtitle) at the top, while headings at H2 and lower stand with, though apart from, the body text.

What is an Example of a Heading in a Book?

Picture yourself opening a book to its first chapter. You see the chapter title and scan the introductory paragraphs before you reach the first heading — much as you see in the following example from Blink by Malcolm Gladwell:

Chapter One: “The Theory of Thin Slices: How a Little Bit of Knowledge Goes a Long Way”

What is a Heading in an Essay?

Headings in essays are similar to what you’ll see here in this blog post. After the essay title, you’ll read the introductory paragraph/s, after which may come a heading that introduces the main focus of the paragraphs that follow.

Like headings in books, good essay headings give readers an idea of what’s coming. They make it easy to scan the page and get the gist of its content.

They also break up the text into smaller, more manageable chunks, making it easier to read and to stay focused.

What is a Subheading in a Book?

Let’s say the text after that first heading is divided into smaller subsections, each introduced by a lower-level subheading:

How to Write a Heading and Subheading

Now that you have a clearer idea of what headings are and what they can do for your writing, let’s cover some important things to keep in mind:

1. Start with an outline.

Give your book a working title and create an outline with working chapter titles. From there, break down each chapter into headings related to the chapter title.

At this point, nothing is set in stone, and no title, heading, or subheading has to be perfect. Just get the main ideas down and break them down a bit.

Chances are, you’ll end up with at least an idea for the headings and subheadings you want for each chapter.

2. Set up your heading styles.

Use your word processor’s style menu to establish formatting for the heading styles you need. Once you have them set up, you can easily apply the formatting to each heading or subheading in your book by doing one of the following:

Use any of the following style changes to distinguish different heading levels:

Varying the text appearance from one heading level to the next makes them easier to distinguish at a glance.

4. Keep each heading and subheading clear, concise, and scannable.

Every heading should earn its place in your book, as much as every sentence should.

It’s not there just for visual effect; it calls out to the reader and gives them a taste of what’s to come. It should do so as clearly and briefly as possible.

Book titles, subtitles, and first-level headings typically use title case, where the first, last, and all major words are capitalized. Articles (a, an, the), conjunctions (and, or, but), and prepositions (to, for, than, etc.) are in lower-case.

The first element is capitalized in hyphenated words, while subsequent parts are in lower-case, unless they’re proper nouns. The first word after a colon is also capitalized.

Some authors, though, prefer to capitalize every word. These rules are not set in stone, after all; they’re just common practice. There’s room for some flexibility. For example, you might capitalize a preposition you want to emphasize in the title.

Lower-level headings (i.e., subheadings) use sentence case, where only the first word and any proper nouns in the sentence are capitalized.

The important thing, whatever you choose, is to keep it consistent throughout your book.

How To Write An Unforgettable Book Title

6. Keep headings in their proper order.

For example, the immediate subheading for an H2 heading should be at H3 level—not H4. No skipping allowed.

Just as a person cannot be a grandparent before becoming a parent (biologically, anyway), an H2 heading cannot have an H4 grandchild without first spawning an H3 child.

The following diagram makes this a bit clearer.

7. Use headings to enhance the content—not to replace or distract from it.

You want your headings and subheadings to offer a preview of what’s coming; you don’t want them to render your body text superfluous or redundant. Both should work together to make the reading experience as instructive and enjoyable as possible.

If your headings were removed (or ignored), your readers should still be able to get the information they need from the body text.

8. Use multiple headings at each level—or none.

It doesn’t make sense to have only one heading in a chapter because if it describes the entire chapter, it should be the chapter title (or subtitle).

The same goes for subheadings. It doesn’t make sense to have only one subheading to break up the text after a top-level (H2 or H3) heading — because if it describes most or all of the text under the original heading, it will most likely be repetitive and unnecessary.

Too many subheads can be just as visually off-putting as a solid wall of text.

Headings and subheadings that don’t enhance and support the following text have no business taking up space on the page. Cut them out or replace them.

If they can hook the reader and reel them in, the body can do the rest.

Now you know the basics of heading writing, what points in this post stood out for you?

Doubtless, you already know headings and subheadings make a difference in the readability of online content. But if someone were to ask you, “Why are headings important?” would you be able to answer them clearly in your own words?

What will you do differently?