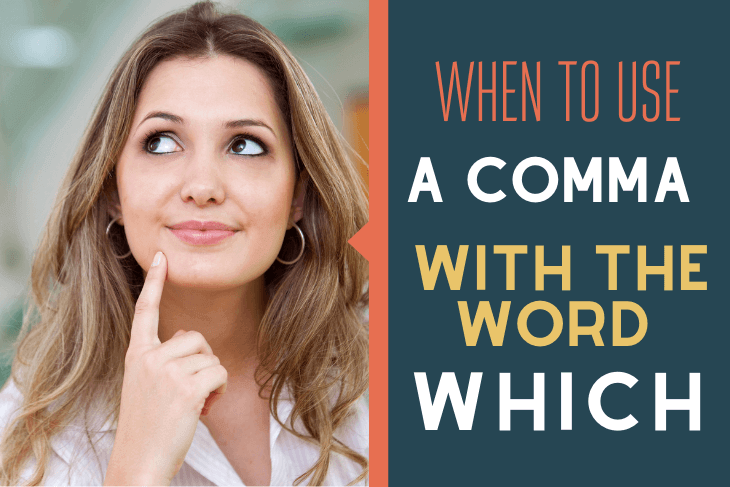 Do you know when to use a comma before which — and when not to?

That’s why you’re here. You’ve seen the word “which” used with and without commas.

And, chances are, you’ve also seen commas in places they shouldn’t be.

You don’t need that confusion in your life.

And once you get through this post, you won’t have it.

You’ll know exactly when to put a comma with which.

And you’ll be able to explain it to others like a seasoned pro.

The Quick and Dirty Rules on Commas Before “Which”

If you’re looking for a short answer to the question, “When do you put a comma before which?” the following rules sum it up nicely:

When to Use A Comma Before “Which”

So, the answer is “Yes” (to the comma) when the sentence as a whole could take or leave the (non-restrictive) clause set off with “which.”

The comma is there to set it off as extraneous to the meaning of the larger sentence.

Take out the non-restrictive (or non-defining) clause, and the meaning of the sentence stays the same. It may not communicate as much, but it still makes the same point.

If you remove the “which” clause, the sentence still says the same thing; the meaning doesn’t change.

If it helps, you can tell yourself, “When ‘which’ has just gotta be ‘extra,’ you introduce it with a comma.” (Because comma rhymes with drama.)

When is there NOT a comma before which?

So, now that we’ve covered the ONE case with “which” that calls for a comma, let’s cover the cases where you’ll leave the comma out.

And now, for some examples, let’s start with restrictive clauses. They’re called “restrictive” because they restrict the scope of a sentence to the content introduced by the “which” clause. By doing so, they directly impact the meaning of the sentence.

The “which” in these situations can be replaced with “that” (and often is). It can also be left out completely. In fact, the sentence often sounds better without either one.

Examples of which with restrictive clauses:

Next up are situations where “which” is part of a prepositional phrase used to avoid ending a sentence with a preposition.

So, while you probably won’t hear them much in spoken English, using constructions like the following will make your favorite grammar purist very happy:

We could go on. Just take a preposition and add “which” and you can probably think of some examples like the following:

Examples of which with prepositional phrases:

Finally, we get to the cases where “which” introduces an indirect or implied question. In this case, the which clause is the direct object of the preceding verb (ask, know, learn, etc.). And, as a rule, we don’t put a comma between a verb and its object.

Examples of which with indirect or implied questions:

In all of the above examples, you can use the subject and its verb to ask a question:

Since the answer to each of these questions is the direct object of the primary verb, we don’t put a comma before the “which.”

Is Grammarly Safe and Secure? All You Need To Know

9 Of The Most Useful Thesauruses For Writers

To illustrate this, let’s see how it looks when we put commas before other examples of direct objects:

That last one roughly illustrates how painful it is to see a comma between a verb and its object. It just doesn’t belong there.

When do you need a comma after which?

The only time you’d need to put a comma after “which” is to set off a parenthetical phrase (also called an “aside”) — which is also not essential to the meaning of the sentence.

Here are some examples;

As you can see, it’s possible to have a comma both before and after a which. In those last two examples, the nonrestrictive clause starting with “which” is non-essential. So is the parenthetical phrase that comes right after the which.

You can hear the slight pauses in both places, right? It’s as if you’re signaling the reader to slow down a bit and listen for the sudden break in the flow of the sentence.

Sure, you could just scrap those pauses and strip the sentence to its essential elements. But while you wouldn’t sacrifice the meaning, you’d lose much of the sentence’s character.

Character and commas often go together.

Now you know how to answer the question, “When is there a comma – before or after which?” you can explain the rules to anyone who asks.

It turns out the only time you really need a comma is when the “which” clause isn’t strictly necessary to the sentence.

The comma is there to make reading easier.